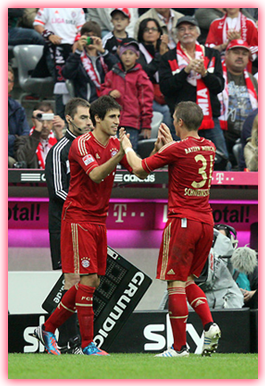 I could not have chosen a better day than September 2, 2012 for my debut in the Bundesliga, my first game for Bayern. It was just the day that I turned 24. We won comfortably 6-1 at Stuttgart and jumped into the field in the 77th minute. The change was enacted by Jupp Heynckes to relieve Schweinsteiger, a jewel of the club. The sound of the Allianz Arena was tremendous and the reception of the fans to walk on the grass was spectacular. Something memorable and, of course, the best possible birthday present.

After six seasons in Bilbao it came in the summer of 2012 an opportunity to grow. Bayern Munich knocked on my door offering all one could wish for: one of the biggest clubs in the world and history of Europe called me to enter a high quality team that will always fight for all the titles both nationally and internationally. Its interest in having me for its project was firm as a rock and the occasion, irresistible. And who knows if unrepeatable. Any professional has the right to aspire to new challenges so I let the Athletic know, a club I will always owe a lot and where I had given my best for six years. After tough negotiations and weeks of uncertainty, Bayern paid the buyout clause unilaterally breaking the contract. It was a long and winding road, but all dissipated when I first saw myself with the shirt of Bayern. The figures were very high, it was said it was the biggest transfer in the history of the Bundesliga but, like when I left Tajonar to go Lezama, these circumstances only serve me for motivation and for giving even more if possible.

Since I first stepped on the Club facilities and on the Allianz Arena I knew I could expect an exciting stage. Everything was exceptionally different from what I had previously lived. To start with, everything was planned in detail. One of the first things I did was to join Heynckes to close a 'planning' of the season. I played more than 60 matches with the Athletic past season, having only nine days summer vacation, after playing the UEFA Euro and the Olympics. One concern of the coach was to get the most, but go slowly and so we decided to go step by step, game by game.

When I arrived I chose number 8 and in my presentation the display on the field of the Allianz Arena was something to remember. As always, I was surrounded by my family, as in each major step I take in life. What more could I ask for?

The season concluded with the best results. We won the Bundesliga crown in april with a strong effort from the squad, so early that we had a long period for a specific work ahead the Champions League final spell. To overcome FC Barcelona was a big challenge but fortunately our effort was rewarded and we did not suffer at home and away on the semifinal contest. The final game at Wembley was the maximun. On such an historic stadium at London we fought against Borussia Dortmund in a cent per cent deutch final. We started taking the lead but opposition scored the equaliser and we had to wait for the winner until the last stages of the game. Rooben scored the winner on minute 89 and crowned all of us Champions of Europe. When we heard the referee’s last whistle I looked back in an eye flip to my whole career, since I began with five years old. I remembered all the moments since I started to kick the ball in my hometown Ayegui. All the effort worth it by far. At least we put the ice on the cake with a DFB Pokal triumph over Stuttgart in Berlin. An unforgettable season without any doubt and an unbeatable start for my FC Bayern era.

Once finished the season we said goodbye to Jupp Heynckes -great person as well as coach- and our solid platform in the three-title win. He helped me a lot because he was one of the few who spoke Spanish on the team. After wishing well and the best for future I joined Spain National Team heading for the FIFA Confederations Cup knowing that Pep Guardiola would be our new coach, a guarantee to keep walking the same track of success Heynckes led us through. All the reports I had about Pep from Spain squad teammates were absolutely amazing, so from the very first time I was looking forward to work with him as soon as possible.